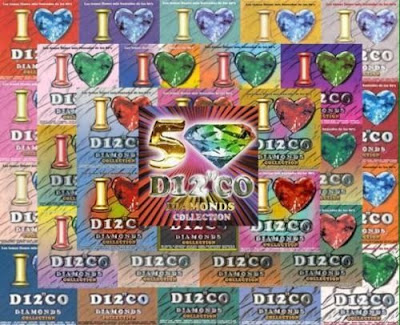 Euro Disco (also Eurodisco or Euro-disco, or "80s European dance") is a term that was first used during the 1970s to describe a variety of non UK-based European disco pop music. Euro-disco songs, like other related genres such as Euro-pop and Euro-dance are usually lightweight, slickly produced, catchy songs with bouncy dance beats, and English-language vocals over a contrasting verse-chorus song form and later, synthesizer-based accompaniment.

The term Euro-disco is also used to refer to the styles and genres of electronic dance music that emerged from Europe in the early 1980s (most notably Italo Disco, Eurobeat and the German variation of Italo Disco, which was danced in the Discofox style). The term is often used broadly, to encompass the whole Italo-disco style (both Italian and non-Italian productions), some European New Wave productions, the British Eurobeat hits (most of them marketed as "Hi-NRG" in America), some early 1980s Canadian Disco productions, Spacesynth and many 1980s Europop hits with a dance flavor.

During the late 1990s and early 2000s, the Italian Italo Disco music fans began using the term "Euro-disco" to describe the non-Italian italo disco productions from the mid-to late 1980s, especially those from Germany. Decades before, during 1979-1984, the term rock elettronico used in Italy for some music styles, including what later would became "Italo Disco" and Space Synth.

Euro-disco is largely an off-shoot of contemporary American music trends going as far back as Jazz, Rock, Soul, Funk and Disco. In the 1950s and 1960s besides the heavy American influence, the French/Italian created pop music off-shoots, with a dance-oriented sound became prevalent in Europe. Those 1950s and 1960s euro-pop hits, spread around West Europe, because of the French Scopitone and the Italian Cinebox/Coilorama Video-jukebox machines. Another root is the Eurovision song contest, especially in the 1970s.

The Swedish European Pop Group ABBA, won the 1974 Eurovision song contest, with the song "Waterloo". The specific song is a typical example of a 1970s European pop song (euro-pop), with a dance manner. The success was huge and many European producers, instantly produced many pop hits that didn't necessary sound the same, but kept that dance manner. That created, in a very short period of time, a whole new commercial music industry in Europe, to meet the demand for social dancing music. The Discofox dancing style was a result of that situation. It is reported that the American music journalist Robert Christgau used the term "Eurodisco" in his late 1970s articles for The Village Voice newspaper.

Those Eurovision-like hits (with the dance manner) that followed ABBA's success, became popular on the European Discotheque, where clubgoers met to do social dancing. The birth of "Eurodisco" became, when Germans took the "Euro" from the "Eurovision" and the "Disco" from the "Discotheques" and created the word "Eurodisco", almost at the same time that the term "Disco" appeared in USA.

An example of the term "Disco" with no relation with a specific music style (and dance music in general), is the Disco (TV series) that aired in Germany on the ZDF network from 1971 to 1982. This show proves that the term "Disco" was enough widespread at the time, that the second national TV network of Germany used it for a general music TV show in 1971. Another later example, is the show "Discoring" on Italy's RAI channel (Started in February on 1977)

The term Euro-Disco was first used during the mid 1970s to describe the non-UK based disco productions and artists such as Swedish group ABBA, the German group Boney M, the French Cerrone, Ottawan (together with other acts produced by Vangarde and Kluger) and Amanda Lear, the Germans Dschinghis Khan and Silver Convention, and the Dutch Snoopy and Eurovision song contest winners Teach-In.

1970s Eurodisco soon had spinoffs and variations. The most notable spinoff is Space Disco, a crossover of Eurodisco and US'Hi-NRG Disco. Another popular variation, with no specific name, appeared in the late 1970s: a "Latin"-like sound added to the genre, which can be heard in Italy's Raffaella Carrà and France's Gibson Brothers.

One of the early representors of the 1980s genre was a British group Imagination, with their series of hits throughout 1981 and 1982. The term "Eurodisco" quickly faded in the 1980s and replaced by the very wide term of "Italo-disco" for more than a decade. Notably, there was also some Canadian Disco productions (Trans X, Lime), that at the time called "itado-disco" in Europe, but not in America (the term Hi-NRG Disco used there insteed).

In 1984, the German Disco artists Modern Talking and Bad Boys Blue, became popular in Central, southern and Eastern Europe and established a German variation of the "Italo-disco" sound, that was danced in the discofox 1970s style. That style became very popular in East Europe and remained popular until the early 1990s. In the late 1980s, Italian disco artists Spagna and Sabrina combined Italo-disco and Eurobeat elements and became popular in Europe with euro-disco songs charting in many European countries.

Britain's best-known contributors to the 1980s euro-disco music were during the mid/late 1980s. The Pet Shop Boys and the Stock/Aitken/Waterman production team are notable examples. This team produced slickly-produced music by singers such as Rick Astley and Kylie Minogue and conquered the airwaves. The S/A/W hits called Eurobeat in Europe but marketed as "Hi-NRG" in USA.

During the late 1980s, Euro disco hits were produced in Spain and Greece and much later in Poland and Russia. Meanwhile, a sped up version of Eurodisco with Eurobeat elements, became successful in the US, under the term "Hi-NRG". Even today for many Americans, "Hi-NRG" means Paul Lekakis and the London Boys. Those hits (and few others, like Londonbeat's "I've been thinking about you" from 1991) were the last hits called "Eurodisco" in Europe.

By the early 1990s, Eurodisco was influenced by the emergence of Disco-rooted genres such as House, Acid and the Electro (pop/dance/synth) music styles, and replaced (or evolved) on other music styles. "Eurohouse" and Italo-NRG are the most notable ones and connected directly with the Italo-Disco music scene. In America, especially for the Eurohouse style, they use the earlier term of "Eurodance" to describe this 1990s evolution of "Eurodisco"

Technically speaking, the last form of Eurodisco, is French house, a music style that appeared in France during the mid 1990s and widespread slowly in Europe. French House is more of a "back to the roots" music style, with 70s euro disco influences far before the Italo Disco explosion (more specific Space Disco, Hi-NRG disco, Canadian Disco and P-Funk).

By the mid-late 2000s, Euro disco saw renewed interest. Artists such as Irene Cara, Berlin and the late Laura Branigan saw a surge in popularity, especially in places where it was not commercially successful after 1984, such as North America and South America. A notable Euro disco artist to rise during this decade is Mark Ashley. His single "Give Me a Chance" became his most successful single yet, making the Top 40 of the Austrian chart.

Influence in the United States

The influence of Euro disco had infiltrated dance and pop in the US by 1983, as European producers and songwriters inspired a new generation of American performers. While disco had been declared "dead" due to a backlash there in 1979, subsequent Euro-flavored successes crossing the boundaries of rock, pop, and dance, such as "Call Me" by Blondie and "Gloria" by Laura Branigan, ushered in a new era of American-fronted dance music.

Branigan (produced by German producer Jack White) moved deeper into the Euro disco style for further hits, alongside Giorgio Moroder-produced US acts Berlin and Irene Cara. By 1984, musicians from many countries had begun to produce Euro-disco songs. In Germany, notable practitioners of the sound included Modern Talking, Sandra, and Alphaville. Austria had Falco, although he was also heavily influenced by rap and rock music.

I would like to exchange links with your site www.blogger.com
Is this possible?