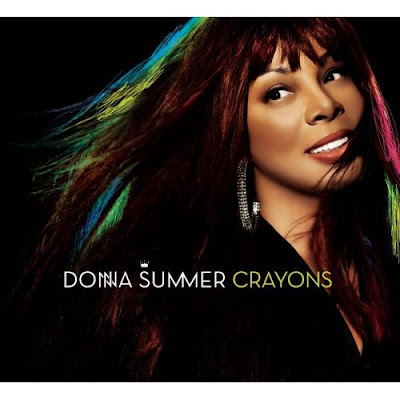 Donna Summer
Crayons (album)
From Wikipedia, the free encyclopedia
Crayons is the latest studio album by American pop icon Donna Summer released on 20 May 2008 in the United States. It is her first album of original material since 1991's Mistaken Identity.

Recorded over a period of three years since signing with the independent Burgundy label in 2005, Crayons marks Summer's first full-length studio album in over seventeen years since the release of 1991's Mistaken Identity. She worked on the album with a number of different producers and songwriters including Greg Kurstin, Danielle Brisebois, J. R. Rotem, Toby Gad, Lester Mendez and Evan Bogart, the son of Summer's former record label boss at Casablanca Records, Neil Bogart.

Summer recorded twelve songs for the album and the title track is a duet between her and reggae veteran Ziggy Marley. The album's first official single, "Stamp Your Feet", was released to radio on April 15, 2008 (2008-04-15). A promotional single for the Latin-flavored "I'm a Fire" recently reached number-one giving Summer her 13th number-one hit on Billboard's dance club-music play chart and her 14th #1 hit on the various Billboard Singles charts. She has reached #1 on the Billboard charts in each of the past four decades.The album debuted on the Billboard 200 at number 17.

The Queen is Back! Legendary singer songwriter Donna Summer is back with her first studio album in 17 years. In the thirty plus years that Donna Summer has been making music she has never confined her artistry to just one genre. Although Donna is, and will always be, "The Queen Of Disco" to many fans, her hits have spanned multiple musical genres from Rock to R&B to Inspirational and of course, Dance.

Summer helped to define the 70's pop music generation and Crayons has all the characteristics that made Donna an icon. Containing a potent mix of the up-tempo tunes and ballads, the new album showcases incredible new material that is written by Donna (who wrote or co-wrote the majority of her hits of the 70's and 80's). Working with Donna were renowned writers and producers including: Greg Kurstin (Lilly Allen, Pink), Danielle Brisebois (Natasha Bedingfield, New Radicals), JR Rotem (Sean Kingston, Rihanna), Evan Bogart (co-writer of Rihanna's smash "SOS" and the son of legendary record executive, Casablanca Records founder and Donna's mentor, Neil Bogart), and Lester Mendez (Shakira, Santana).
Posted by disco2go at 07:50 10 комментариев: