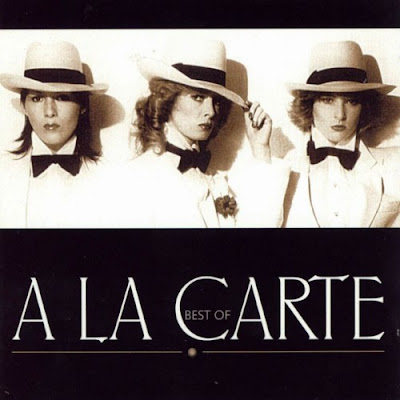 In 1978 two then little-known producers — a married couple of Tony Hendrik and Karin Hartmann, employed by Hansa International (sub-label of Ariola-Eurodisc), matured the project of female pop group: these girl-groups were especially popular in Europe at the late 70s. Among others especially dominated Arabesque (Germany), Baccara (Spain), Maywood and Luv (both from the Netherlands). Thus, there's no something special in appearance of one new act called A LA CARTE ("portioned dish"), and this "dish" consisted three nice-looking girls.

While trio Arabesque conquerred the venues of South-East Asia and, first of all, Japan, trio A La Carte conquerred European Discos. There were just a small differences in music and performance and even in the way of their "formation" and these endless changes in line-ups of the two. And it's absolutely incomprehensible thing why Europe preffered not Arabesques... First single of A La Carte "When The Boys Come Home" (Ariola/Hansa 100 478-100) was released in March 1979. Song, performed by three attractive girls from London: Patsy Fuller, Julia and Elaine, has got popularity and group was invited to the famous German TV-show "Musikladen" ("Music Shop"). Single had good sales and, in October was released the second catchy single "Doctor, Doctor (Help Me Please)" (Ariola/Hansa 101 080-100), yet in new line-up: Patsy Fuller, Jeanny Renshaw, Denise Distelle. After that nobody dares to deny their reputation of the best dance girl-band. In 1980 one more replacement occurs: instead of Denise Distelle came Katie Humble. In March 1980 this line-up launched new single — cover of Manfred Mann's 60s super-hit "Do Wah Diddy Diddy" (Ariola/Hansa 101 677-100) in a short time followed by their first album — "Do Wah Diddy Diddy Round" (LP: Ariola/Hansa/Coconut 202 143-320). Michael Cretu was among the songwriters of these album; lately he succeded more with solo-career of Sandra Lauer (one from "brave three" Arabesque, a bit lately she became Sandra Cretu) and even much more with his synth-pop project Enigma. But the next single of A La Carte — "Ring Me, Honey" (Ariola/Hansa 102 429-100), was released in September 1980.

In January 1981, after change of two members, Jeanny Renshaw, Linda Daniels and Joy Martin released new single "You Get Me On The Run" (Ariola/Hansa/Coconut 102 871-100). The lead vocals in the song were of Jeanny and Joy. The third girl, Linda Daniels, was needed only for "phantom" presence of third singer as recently Denise Distelle. Then were issued 3 singles and next album called "Viva" (LP: Ariola/Hansa/Coconut). There are already 2 songs of Michael Cretu on this album: "Wanted (Jean Le Voleur") and "In the Summer Sun Of Greece". The last — "In the Summer Sun Of Greece", was released lately on single (Ariola/Hansa/Coconut 104 263-100) in April 1982 and its front cover demonstrates one more change in line-up: next Kati Humble's comeback instead of the blue-eyed blonde Linda Daniels. This line-up existed 'till group's splitting.

In July 1982 they released the only one single "Aha Tamoure" (Ariola/Hansa/Coconut 104 569-100) and first total of the group's activity was summed up on first compilation — "The Wonderful Hits Of A La Carte" (LP: Ariola/Hansa/Coconut 204 935-302). This album included nearly all hits of A La Carte: "When The Boys Come Home", "In The Summer Sun Of Greece", "Do Wah Diddy Diddy", "Aha Tamoure", "Viva Torero" and others.

In January 1983 was released the mysterious single called "Radio" (Ariola/Hansa/Coconut 104 918-100), it was included 2 new songs, which for unknown reason, never issued on any LPs.

The next album of group "Rockin' Oldies" (Ariola/Hansa/Coconut 205 743-320) and new single "On The Top Old Smokie" (Ariola/Hansa/Coconut 105 802-100) were released at the same time in September 1983. Lately, in 1984, group launched the next single "Jimme Gimme Reggae" (Ariola/Hansa/Coconut), the title song was the new version of the one from first album and completely new song — "Lightyears Away From Home" was on the back side. After that, A La Cartes disappered from fans' eyes the same as Arabesque. Probably, it was the result of "birth" of new "lovely child" of their producers — Karin Hartmann and Tony Hendrik — male trio Bad Boys Blue, launched in 1984 with "L.O.V.E. In My Car ". But, maybe, because of decreasing demand in music market to the female acts and increasing vice versa to male ones. The attractive girl-groups were competed by male duos and trios like Modern Talking, Joy, London Boys, Silent Circle, Pet Shop Boys...

In 1989 well-known in Europe DJ Mungo Jerry undertook an attempt of "resurrection" of A La Carte. This new project had nothing in common with old band. It's used a glory of their names and image. Three young girls found for the aim recorded single "Dancing In The Summertime" (12" single: BMG Ariola/Coconut 612 508) and album "Sun Sun Summertime" (double CD: BMG Ariola/Coconut 296 578). These releases included the bunch of most popular A La Carte hits of the 80s in non-stop recording. More likely and likely, this attempt wasn't successful, so as after issuing of this album the group disappeared from stage...

About the destiny of group's members after splitting is known just a bit. Patsy Fuller lives in Berlin and engaged as in-studio singer. Katie Humble do the same job in London. Jeanny Renshaw, which was "the lead voice" in songs of A La Carte, after splitting, recorded solo single "Life Goes Up - Life Goes Down". Lately, after she was married and become Frau Major, she came to Australia where she lives now, working as advertising agent.

10 years after, in 1999, in time of the splash of interest to the dance music of the early 80s, a few comebacks of recently popular singers and reunification of forgotten groups, BMG Ariola Miller GmbH (Ariola Express) released new album of A La Carte "Best Of", which trying to be up-to-date, includes covers of forgotten hits, having recalled to the world that someday this music was very popular...

It said something was infected but it disappeared before i could read it. I use Avast...It may or may not be part of the avast VRBD (Virus Recovery Database) Is this something with Avast or maybe something with my pc?? Can anyone tell me what this is and how to get back to it so I can read what it said. [url=http://gordoarsnaui.com]santoramaa[/url]