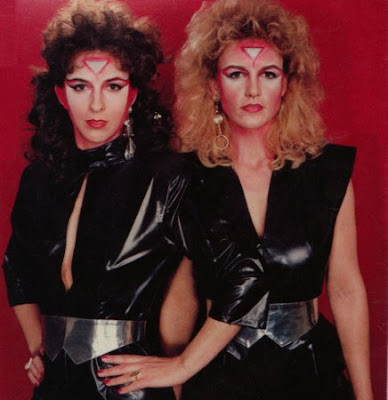 The Dutch pop duo Maywood was formed in 1979 by sisters Alie and Edith de Vries from Harlingen. Previously the members of the Ladypops, Karina's and Colt 45, they performed under the names Alice May and Caren Wood. Taking inspiration from ABBA and such fellow Dutch acts as Pussycat and Teach-In, dark-haired Caren (lead vocals) and blonde Alice (songwriter/backing vocals) broke into the Europop scene with the single "You Treated Me Wrong" in December of 1979. They hit the Netherlands' number one with "Late at Night" in June of 1980, and they had two more Top Five successes with "Give Me Back My Love" (September of 1980) and "Rio" (July of 1981.) Maywood's records were sold in 52 countries and it received awards at music festivals in Germany, Poland, Japan and South Korea. The duo's popularity in Latin America prompted the sisters to record an album with Spanish-language covers of their hits. In 1990, they represented the Netherlands at the Eurovision Song Contest with "Ik Wil Alles Met Je Delen." Maywood split up in 1995. ~ Yuri German, All Music Guide