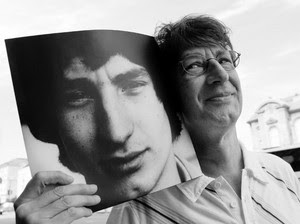 The record is credited to Junior Claristidge and Joachim Sherylee, pseudonyms of two french library writers Bernard Fevre and Jacky Giordano, respectively. It was made manually in a recording studio in the suburbs of Paris using synths and occasional tape loops and a drummer. No midi or computers.

According to an interview given by Bernard Fevre in January 2007, Jacky Giordano only financed the recording sessions. His being credited as co-composer was just a deal for recouping his financial investment.

Bernard Fevre came back with a new opus in 2006 under the guise of Black Devil Disco Club although some remixed versions taken from this second album were released under the original Black Devil monicker by the same label.
Posted by disco2go at 11:58

Good post and this enter helped me alot in my college assignement. Thanks you as your information.

Thanks for all the Bernard Fevre gems