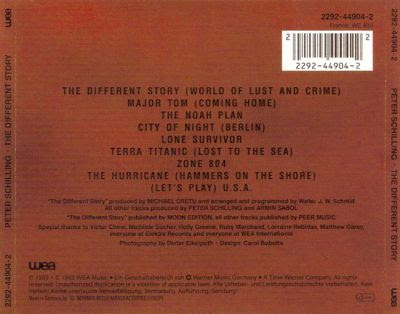 PETER SCHILLING - (1989) THE DIFFERENT STORY
(WORLD OF LUST AND CRIME)

This review is from: Different Story (Audio CD)

Peter Schilling is truely one of the greatest artists to emerge from the 1980s. Each song on this CD are enjoyable from begining to end. "Zone 804" and "Major Tom" have got to be the best tracks on a very well put together CD. Each track gives you something new, best of all none of the songs sound the same, as you might find with groups from 90s and the new millenium. Grab yourself a copy of this CD, it might not be around much longer with record companys now days letting classic albums go out of print.

Peter Schilling (born Pierre Michael Schilling on January 28, 1956, Stuttgart, Germany)[1] is a German synthpop musician whose songs often feature science-fiction themes (aliens, astronauts, nuclear holocausts, etc.). His 1983 album, Error in the System, generated his only international hit single, "Major Tom (Coming Home)", a retelling of David Bowie's classic 1969 song "Space Oddity".[1] Although the song was originally recorded in German, the international hit version was sung in English. In 1984 and 1985, Schilling released the albums 120 Grad and 120 Grad's English language version, 1985's Things to Come. From 1986 to 1989, Schilling released non-album singles and put out his 1988 compilation The Different Story. In 1990, Schilling suffered from burnout and the following year he took a break. In 1994, he married his girlfriend Catyana.

In the late 90s, Schilling formed a side project called Space Pilots,[1] which appeared on the first issue of the popular dance music compilation Dancemania series.[2] The band included Catyana Schilling, J. Feifel, and P. Magnet. They have recorded only one song, titled "Trip to Orion". It was released on vinyl and CD in 1995, and appears on the Japanese dance compilation CD Dancemania 1. The song is based on and includes vocal samples from the German science-fiction TV show Raumpatrouille Orion.
Posted by disco2go at 14:09

For women who're pregnant, this product can also enable stop the formation of these ugly stretch marks.