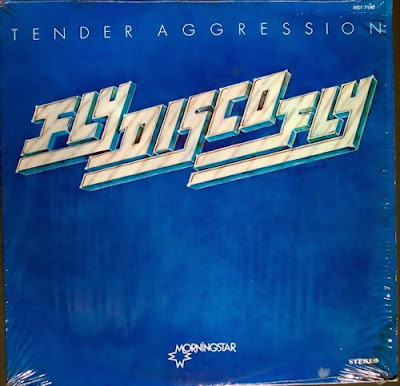 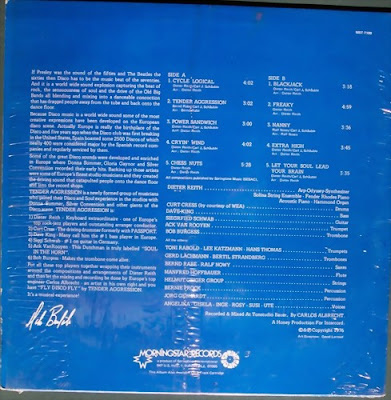 "If Presley was the sound of the fifties and The Beatles the sixties then Disco has to be the music beat of the seventies." So goes the liner notes to this little-known disco classic, a 1976 concoction from some of Germany's finest musicians, led by composer, arranger and keyboardist Dieter Reith, best known for his jazz work on the MPS label during the 1970s.

First issued as Power Sandwich on the German Intercord label, this instrumental disco album was one of many issued by studio groups assembled to cash in on the disco phenomenon (e.g., Love Unlimited Orchestra, Munich Machine and the Salsoul Orchestra, a.o.). The worldwide success of Silver Convention's 1975 hit, "Fly Robin Fly," a nearly instrumental disco classic that boasted several of the musicians who are heard here, inspired the small American label Morningstar to call the album Fly Disco Fly.

Call it what you will, it is one of disco's best kept secrets, brimming with grooves that seem so prototypical as to be clichés. In truth, though, the 10 tracks heard here serve as blueprints for what disco would come to be - especially as heard so frequently at the time on many TV and film soundtracks. Tender Aggression was there first.

(In all fairness, it's very likely this music was initially recorded as "production music" or "library music," intended for use only in TV and film programs. But with disco's success and, more likely the success of such German exports as Silver Convention and Donna Summer around this time, it was probably decided to issue the music on record.)

The album's best moments come on the funky "Cryin' Wind," the pick hit here and still spinning on Luxuriamusic.com, the righteous "Blackjack," the inspiration for Fantastic Plastic Machine's 2001 dance hit "Love Is Psychedelic (Full Spoken Mix)" and the ultra groovy "Extra High." Ralf Nowy's pretty "Nanny" is something of a respite from the beat, but perfectly in keeping with the mood of the proceedings, offering an ideal platform for both van Rooyen and Reith to reflect on the occasion.

Despite the presence of players better known in the jazz world, Reith's focus here is on tightly constructed arrangements - alternately voiced by either strings or horns - over the rhythm section's funky backings (King and Cress had previously worked together on the drummer's highly sought after Curt Cress Clan, so their rapport was already well established). There is the occasional improvised solo, but voiced softly and correctly on flute, flugelhorn or electric piano, almost behind the groove so as not to get in the way. The only time a solo dominates the proceedings is when Schwab helms one. But it's usually brief and seemingly constructed to muscle up the proceedings.

Surprisingly, the album yielded no singles (to my knowledge) and, less surprisingly, no hits. Still, Reith's aggregate managed to issue a follow-up album in 1977, European Maid (Intercord), before it disappeared for good. But this one never made it out of Germany, so copies of it are extremely rare. There's also an extremely rare 45-only release of Tender Aggression's 1977 theme to the German TV film Die Kette, which appears on Frank Jastfelder and Stefan Kassel's inspired 2001 CD The Mad, Mad World of Soundtracks Volume 2 (Boutique).
Posted by disco2go at 11:06

Sorry for my bad english. Thank you so much for your good post. Your post helped me in my college assignment, If you can provide me more details please email me.

[url=http://hairtyson.com]phentermine 37.5[/url] are tablets that help slacken up on fuselage weight. The same of these tabs has to be infatuated with water, round 20 minutes ahead of a refection, twice a day.