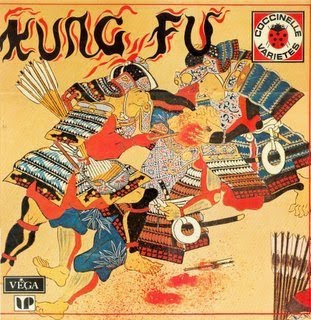 Rather than to spend 165 euros ! keep your money and enjoy this original LP recorded as an « library » funky set. You can consider this as an RKM production (Roland Kluger Music), a belgian record company…Featuring original members from « El Chicles », Sluzny and Ralph Benatar, and produced by Roland Kluger too ; this LP delivers a « fistful » of breaks, basslines & heavy groovy sounds from 1974. Once again, a must for every funkymen & funkywomen…

SUMOS (THE) - kung fu
During the Bruce Lee/Kung Fu madness, producer Roland Kluger made this Kung Fu themed Funk record together with people like Ralph Benatar, Alan Ward, John Sluzny and probably some more session musicians who were involved with the El Chicles records. The same record was also released as Kung-Fu Fighting by The Chinese Fighters, I think for the French market, but I think the two albums differ in two tracks or something like that. Anyway, the album sounds like a great soundtrack to a 70s kung-fu flick: dark and funky songs about kung fu with wah wah guitars, breaks and that typical Euro kitch sound. Lots of samples on this one, too.
Posted by disco2go at 14:39