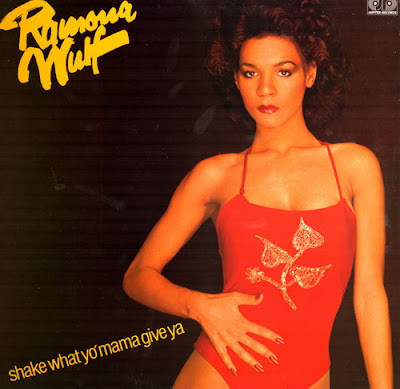 Ramona Kraft was the child of a German mother and an Afro-American father. 15 years old, in 1969, she entered a talent competition where she was discovered by producer Horst Heinz Henning who secured her a record deal with Phillips. Known as just Ramona, she became a teenage star with a string of German schlager singles. In 1974, she signed with Ralph Siegel's Jupiter Records where producer Michael Kunze recorded new material with her. Ramona, now 20 years old, wanted to leave the schlager image behind her, and suddenly the opportunity came when Kunze's Silver Convention project, recorded with session singers who were busy in various other projects, needed a line-up for TV performances. Ramona and another newly signed Jupiter artist Penny McLean were assembled together with singer Jackie Carter who had in fact sung one song on the LP. She left after a few months only and was replaced by Linda G. Thompson. With "Save Me" and especially "Fly, Robin, Fly" (a US #1 hit) becoming hits, the group quickly became busy touring and performing.

Kunze and the group's musical director and composer, Sylvester Levay, wasted no time either and released a solo single by each of the girls to profile them. Penny McLean got "Lady Bump" which became a German #1 hit late 1975, Linda got "Ooh What A Night", while Kunze & Levay chose to record a disco version of The Drifters' "Save The Last Dance For Me" for Ramona, her first English recording which passed without much noticed when released early 1976, coinciding with the release of the girls' first - but Silver Convention's second - album, Get Up And Boogie, which gave the trio another massive American hit. In the summer of 1976, Linda G. Thompson was replaced by American Rhonda Heath, and the group recorded the gloomy Madhouse album which saw a decline in their popularity.

Nevertheless, the group was asked to represent Germany in the Eurovision Song Contest 1977. Levay & Kunze spent the first months of the year recording six new songs with Ramona, including her next single "Natural Man (I'm A Natural Woman)". Packaged with her two solo recordings from 1976, her first English solo album Natural Woman was released shortly after Silver Convention's fourth LP Summernights, May 1977, but Ramona's album sold abysmally. Much to her surprise, though, the song "Step By Step" was sought out as the theme song for an American TV programme. It was remixed by Wally MacDonald for an American 12" release.

Following another change of line-up when Penny McLean was replaced by singer Zenda Jacks, Silver Convention went on an extensive world tour in the fall of 1977 before returning to Munich in December to record vocals for their final album Love In A Sleeper, released early 1978. The album stalled when Zenda Jacks left the group again because of a man she'd met when the group performed in Mexico. Deciding to call it a day, Silver Convention disbanded. While Kunze produced Penny McLean's third album Midnight Explosion, Ralph Siegel himself produced Ramona's next single, a disco cover of the French chanson "Parlez-moi d'amour" which gave Ramona a minor German hit single. Trying to boost her chart appearance, Jupiter Records repackaged her 1977 LP with the two new single tracks and re-released it as Parlez-moi d'amour only to see the LP flop once again.

Then it was decided to re-assemble Silver Convention late 1978. Penny, Ramona & Rhonda reunited to record the group's final single "Café Au Lait / Rollermania" which did nothing. Ramona then paired with producer Horst Hornung in 1979 to cover Celi Bee's American disco hit "Boomerang" before going into studio to record her second English solo album, Shake What Yo'Mama Give Ya on which she branched out in a plesant mixture of disco, ballads, funk, and even rock'n roll on the accompanying single "Thank You Baby", released in March 1980. She made a guest appearance with Hornung's one-off project Dada the same year and also duetted with Chris Roberts on his 1980 LP, but the lack of commercial success made her withdraw from the scene for a few years. She married Hornung December 1980.

In 1983, she was approached by Sylvester Levay to record a German version of Irene Cara's megahit from "Flashdance", "What a Feeling" which Levay had originally arranged and played keyboards on. Ramona's "Flashdance (Tanz im Feuer)" failed to repeat the success of Cara's version and she withdrew once again for a few years.

Then in 1986, she came back with a new album Strip To The Heart, a new single "Body Beat" and a new group, The Paris Girls. The album - written and produced by Horst Hornung - didn't sell, and a second attempt two years later with the album Mood To Mood wasn't more successful, and Ramona disappeared from public view, although on a few occasions, she's performed with her old colleagues Penny McLean and Linda G. Thompson for some Silver Convention nostalgia on German TV.
Posted by disco2go at 14:12