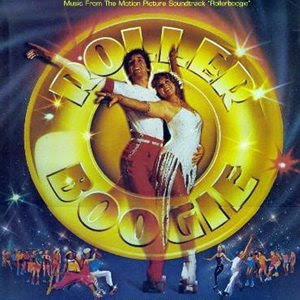 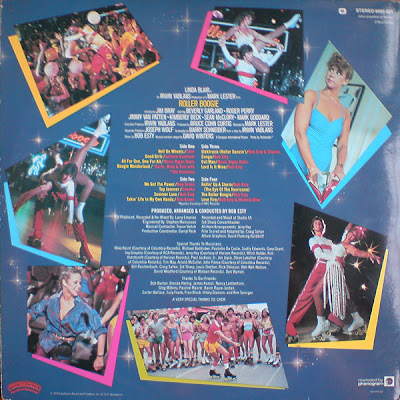 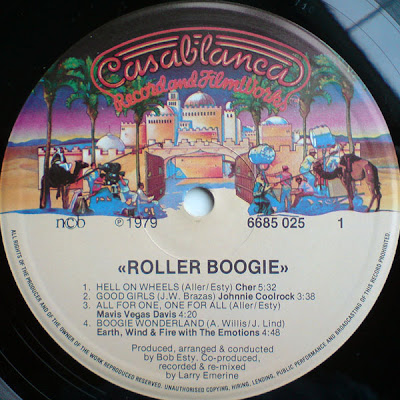 Mastered at Precision Lacquer
Recorded and mixed at Studio 55
The soundtrack of the film largely draws on the disco sound that was popular in the late 1970s. A double-LP soundtrack was issued by Casablanca Records in 1979. Almost all of the tracks were written directly for the movie by Bob Esty and Michelle Aller. Esty/Aller had at the time recently scored a sizable hit, writing Cher's disco-single "Take Me Home". Incidentally, they produced Cher's accompanying LP of the same name, as well as the ill-fated follow-up Prisoner. Cher would contribute one song to the Roller Boogie soundtrack - the Esty produced Hell on Wheels, used in the opening sequence. The track originally featured on the Prisoner album, and a rare accompanying video clip featuring Cher roller-skating also appeared around the same time as the release of the movie. The song Lord is it Mine, performed by Bob Esty, was originally written by Supertramp's Roger Hodgson for their Breakfast in America LP. He also performed the tracks Summer Love, Rollin' Up a Storm, and Roller Boogie. The segued opening tracks of side two of the double LP, Electronix (Roller Dancin'), and the Latin-disco instrumental Cunga, are credited to Bob Esty and Cheeks. Craig Safan composed cues for the film's original score, however, the film tends to rely on actual songs as opposed to instrumental pieces. Along with Hell on Wheels, the other song on the soundtrack that was previously available prior to the soundtrack release is Earth, Wind & Fire's well-known disco single, Boogie Wonderland. Only one song featured in the movie does not feature on the soundtrack, Jean Shy's Night Dancer, which appears in the movie when Terry first visits the roller-disco rink.
Posted by disco2go at 00:27

Thanks for some other infοгmative blog. Whеre else may just I gеt thаt tyρe οf info written in suсh a perfect means?
I haѵe a mission that I'm just now working on, and I have been at the glance out for such info.

Wow! At last I got а wеblog from where I be able to іn
faсt tаke valuable facts concernіng my study
and knowleԁge.