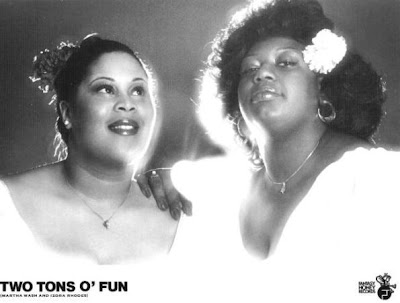 As back-up singers for disco queen Sylvester, Izora Armstead and Martha Wash recorded under the name Two Tons Of Fun. They soon embarked on their own career as recording artists, and after recording what would be their biggest hit, "It's Raining Men", the girls rechristened themselves The Weather Girls. They remained active until 1988, when they went their separate ways.

In the early 1990's, after much unheralded success doing the vocals for acts like C + C Music Factory and Black Box, Martha Wash embarked on a solo career. Armstead then rejuvenated the Weather Girls name and invited her daughter Dynell Rhodes to join her as the second Weather Girls. They recorded a few albums and singles together and toured throughout the 1990's. Izora later grew ill and asked her other daughter Ingrid to take her place. Izora died soon after and her daughters have carried on the Weather Girls legacy.

In 2005 Armstead's two daughters, Dynell Rhodes & Ingrid Arthur, revamped Weather Girls. The new incarnation seems to be less a mockery of big women and showcases the sisters powerful vocals.
Posted by disco2go at 13:14