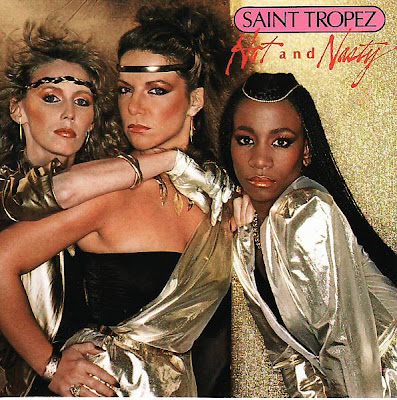 Like many disco groups of the 70s, Saint Tropez was a producers' brainchild, in this case of American producers Laurin Rinder & W. Michael Lewis who had already been successful with disco groups El Coco and Le Pamplemousse. Saint Tropez was a female ménage-à-trois, three good-looking women, striking in lesbian poses on the covers of the first two albums Je T'aime (1977) and Belle de Jour (1978), both hugely successfull disco albums with big symphonic orchestrations and a tight disco backing, all the instruments played solely by the two producers. Je T'aime offered Serge Gainsbourg & Jane Birkin's well-known classic in an equally sensual disco symphony. They also covered material by Van McCoy and Gregg Diamond's "Heart To Heart" (sung in French as "Coeur à coeur"), originally written for The Andrea True Connection. Belle de Jour followed the same formula, yielding two successful 12"s "One More Minute" and "Fill My Life With Love", and also covering Gloria Gaynor's "Most Of All". Typical for this kind of studio projects, lots of different singers were involved in the project.

After a four year hiatus, Rinder & Lewis revived Saint Tropez in 1982 for a third album, Hot and Nasty, which leaned more towards R&B but still kept the lush orchestration of the first two albums. It yielded the single "The Love Stealers", a cover of Peaches & Herb's disco hit. A curiosity for all three Saint Tropez albums was a continued story, an audio film noir in French, telling the story of Nicole who's fallen in love with a woman assailant whom the Paris Police, as well as Interpol, are looking for. It started as "Violation" on Je T'aime, on Belle de Jour it was the title track and "When You Are Gone", and on Hot and Nasty, it was "Femmes Fatales". The third LP cover read an editor's note: "With respect to Femmes Fatales, the fundamental question before us is what will happen to Noicole's lover [...] Perhaps in St. Tropez IV we will learn the answer to this." But there never was a fourth Saint Tropez album. Only a final 12" single "Morning Music" saw the story continue on the B-side "The Chase" which closed the book on Saint Tropez. The group's three albums were all released on CD in 1994, and several Greatest Hits compilations followed.
Posted by disco2go at 11:08