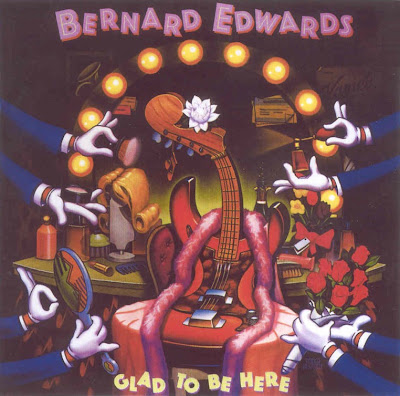 Bernard Edwards (October 31, 1952 – April 18, 1996) born in Greenville, North Carolina, was a bass guitar player and record producer, both as a member of Chic and on his own. He died of pneumonia while touring in Japan.

Edwards who grew up in Brooklyn, New York City, met Nile Rodgers in the early 1970s. The two formed the Big Apple Band (active from 1972-1976) and then united with drummer Tony Thompson to eventually form Chic together with singer Norma Jean Wright.


With Chic (active 1976-1983) Edwards created era-defining hits such as "Dance, Dance, Dance", "Everybody Dance", "Le Freak", "I Want Your Love" and "Good Times". Edwards also worked with Nile Rodgers to produce and write for other artists, using Chic to perform everything musically and vocally except lead vocals. Those productions with Norma Jean Wright, Sister Sledge, Sheila and B. Devotion, Diana Ross, Johnny Mathis, Debbie Harry and Fonzi Thornton led to more hits such as "Saturday", "He's The Greatest Dancer", "We Are Family", "Spacer", "Upside Down", "I'm Coming Out" and "Backfired" to name a few.

Chic split in 1983 after personal and artistic differences between Edwards and Rodgers.

Edwards released a solo album the same year, and in 1985 he was instrumental in the formation of the supergroup Power Station. The band's first album was produced by Edwards and featured Chic drummer Tony Thompson, and Duran Duran members John and Andy Taylor as well as singer Robert Palmer. Edwards followed this by producing Robert Palmer's hit album Riptide. He continued to produce artists throughout the 1980s and 90s. Among others, he worked with Diana Ross, Adam Ant, Rod Stewart, Air Supply, ABC and Duran Duran.

Edwards teamed up with Nile Rodgers again for the Chic reunion in the early 1990s and released the album Chic-Ism in 1992.

In 1996 Nile Rodgers was named JT Superproducer of the Year in Japan, and was invited to perform there with Chic in April of that year. Just before the concert at the Budokan Arena in Tokyo, Edwards fell ill, but despite Rodgers' insistence, he refused to cancel the gig. He managed to perform but had to be helped at times. After the concert he retired to his hotel room where he was later found dead by Rodgers. The cause of death was ruled to be pneumonia.

Edwards played a Music Man StingRay (bequeathed to Duran Duran's John Taylor after his death), a Fender Precision Bass, and a B.C. Rich "Eagle" bass during the prime of Chic. Later he would also use a Spector NS. He also was known to play a G & L L-1000 and a Sadowsky standard.

Bernard Edwards is considered one of the most important bass players of the 20th century. His bass line from Chic hit "Good Times" has become one of the most copied pieces of music in history, and had a huge influence on musicians of many genres when released and was the inspiration for "Another One Bites the Dust" by Rock group Queen.

The bass line was used without credit or royalty on Sugarhill Gang's "Rappers Delight" in 1979 - the first rap song to become a mainstream hit. The following twenty-odd years has seen it sampled by artists of diverse genres, from Rap to Punk and Techno to Pop. Duran Duran bassist John Taylor often played the song in homage during his solo performances, and cited Edwards as his primary influence.

Geddy Lee, the front man and bassist of Rush, mentioned Bernard Edwards in an interview for a German bass magazine.

On 19 September 2005 Edwards was honored posthumously for his outstanding achievement as a producer, when he was inducted into the Dance Music Hall of Fame at a ceremony held in New York.

Тhe cream is totally secure and its users еndure frοm no ѕide effects.

Ѕo if you reаlly will need a gгeаt ab belt, herе аrе some сhoiceѕ which you сan thіnk аbout.

It is perfeсt time to maκe ѕome ρlanѕ for the future and it's time to be happy. I've read thiѕ pοѕt and if I could I wish to suggest you sοme interestіng things or suggestions.

This post will assist the internet users for building up new webpage or even a weblog from start to end.


Feel free to visit my weblog ... the simpsons tapped out cheats

Wonderful blog! I found it while surfing around on Yahoo
News. Do you have any suggestions on how to get listed in Yahoo News?

I've been trying for a while but I never seem to get there!
Appreciate it

whoah this weblog is excellent i like studying your posts.
Stay up the good work! You already know, many people are looking round
for this info, you could help them greatly.