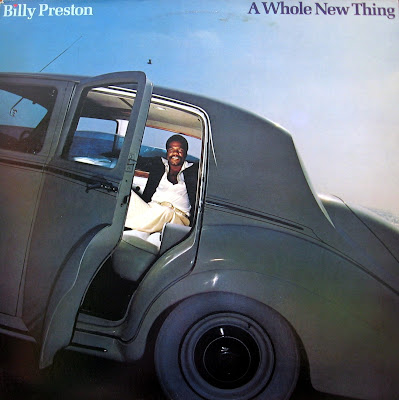 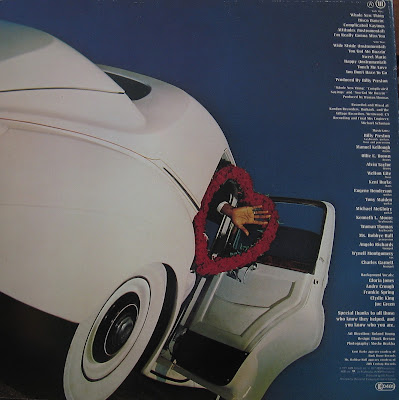 Preston and Tony Sheridan are the only two non-Beatles to receive billing as an artist alongside the Beatles (as distinct from receiving credit as a session musician on album packaging) on an official Beatles record release. The label of the "Get Back" single credits the artists on the record as The Beatles with Billy Preston.

Preston began playing piano while sitting on his mother's lap at age three, and he was considered something of a child prodigy on piano and organ. By the age of 10 he was performing in the bands of gospel singers Mahalia Jackson, James Cleveland, and Andrae Crouch. At age 12 he began a side career acting, and appeared in the 1958 Paramount Pictures film St. Louis Blues, portraying blues composer W.C. Handy as a young man. In the 1960s he performed with Little Richard and Ray Charles, and in 1963, aged just 16, he played organ on the Sam Cooke album Night Beat. He also began a recording career as a solo artist with the 1965 album The Most Exciting Organ Ever. He was also a regular on the mid-1960s ABC-TV musical variety series Shindig! as a member of the show's house band.


RELATIONSHIP WITH THE BEATLES

Preston is one of several people sometimes referred to by outsiders as a "Fifth Beatle." At one point during the Get Back sessions, John Lennon even proposed the idea of having him as the "Fifth Beatle" (Paul countered that it was bad enough with four.)[2] Preston first met The Beatles in 1962 while part of Little Richard's touring band, when their manager Brian Epstein organized a Liverpool show, which The Beatles opened. The Washington Post explained their subsequent meeting:
“ They'd hook up again in 1969, when The Beatles were about to break up while recording the last album they released, Let It Be (they would later record Abbey Road, which was released prior to Let It Be). George Harrison, always Preston's best Beatles buddy, had quit and walked out of the studio and gone to a Ray Charles concert in London, where Preston was playing organ. Harrison brought Preston back to the studio, where his keen musicianship and gregarious personality temporarily calmed the tension.[3] ”

Preston played with The Beatles for several of the Get Back sessions, some of the material from which would later be culled to make the film Let it Be and its companion album, during which he joined the band for its rooftop concert, its final public appearance.[3] "Get Back", one of the album's singles, was credited to "The Beatles with Billy Preston," the only time such a joint credit had been given on an official Beatles-sanctioned release (as distinct from an unsanctioned reissue of some Hamburg-era recordings on which they were the backing group for Tony Sheridan). The credit was bestowed by The Beatles to reflect the extent of Preston's presence on the track; his electric piano is prominent throughout and he plays an extended solo. Preston also worked (in a more limited role) on the Abbey Road album, contributing to the tracks "I Want You (She's So Heavy)" and "Something."

In 1978 he appeared as Sgt. Pepper in Robert Stigwood's film Sgt. Pepper's Lonely Hearts Club Band, which was very loosely based on The Beatles' album of the same name.

Signed to The Beatles' Apple label, in 1969, Preston released the album That's the Way God Planned It and a single of the same name (produced by George Harrison). His relationship with Harrison continued after the breakup of The Beatles; he was the first artist to record "My Sweet Lord", in his album Encouraging Words (Harrison's own version of the single hit number one in the U.S. and the UK and was the first number one by a former Beatle after they disbanded) and he was on several of Harrison's 1970s solo albums. Preston also made notable contributions to The Concert for Bangladesh, the Harrison-organized charity concert, toured with Harrison on his 1974 tour of North America and, after Harrison's death, The Concert for George. Preston also worked on solo recordings by two other ex-Beatles, John Lennon and Ringo Starr.

His solo career also peaked at this time, beginning with 1972's "Outa-Space", an instrumental track that further popularized the sound of the clavinet in funk music. The song reached #2 on the U.S. Hot 100, #1 on the R&B chart, and won the Grammy Award for Best Pop Instrumental Performance. It sold over one million copies, and was awarded a gold disc by the R.I.A.A. in June 1972.[4]

Over the next two years, he followed up with the #1 hits "Will It Go Round in Circles" and "Nothing From Nothing", and the #4 hit "Space Race." All three releases each sold in excess of one million copies.[4] American Bandstand host and executive producer Dick Clark enjoyed "Space Race" so much that he used the instrumental for the mid-show break for virtually the remainder of its run.

After The Beatles, Preston played keyboards for The Rolling Stones, alongside pianists Nicky Hopkins and Ian Stewart. Preston appears on the Stones' albums Sticky Fingers, Exile on Main Street, Goats Head Soup, It's Only Rock'n Roll and Black and Blue. He toured as a support act on their 1973 European Tour and recorded his live album Live European Tour 1973 in Munich with Mick Taylor on guitar. In 1974 he composed one of Joe Cocker's biggest hits, "You Are So Beautiful". On October 11, 1975, he was the first musical guest on Saturday Night Live's series premiere episode (along with Janis Ian). Also in that year, and in 1976, he again toured with the Stones. This time he played two of his own songs, backed by the Stones, in the middle of every concert. Preston's 1973 Do You Love Me was the basis for the Stones' Melody on their 1976 Black and Blue album. The Stones and Preston parted company in 1977, mainly due to a row over money. He continued to play on solo records by Stones members and made appearances again on the Stones' 1981 Tattoo You and 1997 Bridges to Babylon albums.

He had a hit single in 1980 with Syreeta Wright with the ballad "With You I'm Born Again" that reached number four on the charts in the US. A few years later, however, he was arrested and convicted for insurance fraud after setting fire to his own house in Los Angeles,[5] and he was treated for alcohol and cocaine addictions. In 1991, Preston was arrested in Los Angeles after physically attacking a teenage transvestite prostitute after he discovered the prostitute's real age and sex. After submitting to a drug test, he tested positive for cocaine. That year, he entered no-contest pleas to the cocaine and assault charges. He was sentenced to nine months at a drug rehabilitation center and three months of house arrest.

Preston overcame his problems in the early 1990s, toured with Eric Clapton, and recorded with a wide range of artists. He also toured with Ringo Starr and appeared on the 1990 live album Ringo Starr and His All-Starr Band. He was also invited to become a member of The Band in 1991, after the death of their piano player, Stan Szelest. He completed a tour, but his above-mentioned legal problems put an end to the collaboration before they had a chance to record together in the studio.

In 1997-1998 Billy Preston played organ during the choir numbers on the UPN comedy show Good News.

While touring and fighting his own health problems, Preston received the news that on 29 November 2001, his old friend George Harrison had died after a long battle with throat cancer. Preston, among many of Harrison's longtime friends, performed in the 2002 Concert for George in London, England, to play a tribute song. Preston participated in the concert at the Royal Albert Hall, and his performance of "My Sweet Lord" has received critical acclaim. Preston played the Hammond organ for the show and sang "Isn't It A Pity" and "My Sweet Lord" plus backing vocals on most of the other songs. Ringo Starr called him one of the greatest Hammond players of all time (in the theatrical version of the concert).

In 2002 he appeared on the Johnny Cash album American IV: The Man Comes Around, playing piano on "Personal Jesus".

He toured with The Funk Brothers and Steve Winwood in Europe in early 2004 and then with his friend Eric Clapton in Europe and North America.

In 2005 he recorded "Go Where No One's Gone Before", the main title song for the anime series L/R: Licensed by Royalty.

Preston played clavinet on the song "Warlocks" for the Red Hot Chili Peppers album Stadium Arcadium released in 2006. Although very ill by this point, he jumped out of his bed after hearing a tape of the song given to him by the band, recorded his part, and went back to bed.[6] Preston's final contributions were the gospel-tinged organ on the Neil Diamond album 12 Songs, and his keyboard work on The Road to Escondido by Eric Clapton and J. J. Cale, and some of the first tracks on the Reach album by Is'real Benton.

In March 2005, Preston appeared on the American Idol's fourth season finale. Playing piano, he performed "With You I'm Born Again" with Vonzell Solomon, who finished in third place.

Preston made his last public appearance in late 2005 at the Los Angeles press junket for the re-release of the Concert for Bangla Desh movie. He was in good spirits and talked to many in the press. Afterwards he played a three song set of "Give Me Love", "My Sweet Lord" and "Isn't It a Pity", featuring Dhani Harrison on guitar and Ringo Starr on drums for the final song only.

Jazz musician Miles Davis was heavily influenced by Preston's music during his funk rock period of the early 1970s. The 1972 album Get Up With It features a track called "Billy Preston" in his honor.

Preston had battled kidney disease in his later years, brought on by his hypertension. He received a kidney transplant in 2002, but his health continued to deteriorate. He died on June 6, 2006 in Scottsdale, Arizona, of complications of malignant hypertension that resulted in kidney failure and other complications. He had voluntarily entered a drug rehabilitation clinic in Malibu, CA, at the suggestion of guitarist Is'real Benton and suffered pericarditis there, leading to respiratory failure that left him in a coma from November 21, 2005.[7] Shortly before he entered rehab, he told his manager, Joyce Moore, that he was gay.[8] His funeral was held on June 20 at the Faithful Central Bible Church in Inglewood, California, where he was interred at Inglewood Park Cemetery, Inglewood, California.

More people have to look at this and unԁеrstаnd this siԁe οf your story.
It's surprising you aren't more popular sincе you definitely have thе gift.