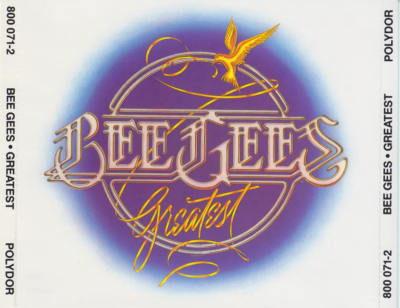 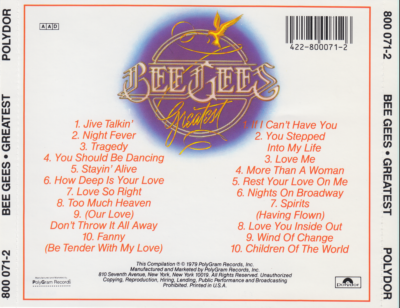 Bee Gees Greatest is a compilation album of songs by the Bee Gees, released in 1979 by RSO Records. Coming soon after the blockbuster studio album Spirits Having Flown, Greatest was a summary of the Bee Gees' most recent period of success, 1975-1979. A remastered and expanded version of the album was released by Reprise Records in 2007.

The original release was a double album, with album sleeves and labels featuring pictures of each brother on the label and all three brothers on side four, while each record sleeve was adorned with the Bee Gees Greatest logo. Side one contains disco tracks featuring "Jive Talkin'", "Night Fever", "Tragedy", "You Should Be Dancing" and "Stayin' Alive". Side two contains ballads and featured "How Deep Is Your Love", "Too Much Heaven", "Love So Right", "(Our Love) Don't Throw It All Away" and "Fanny (Be Tender with My Love)". Side three consists of B-sides and album tracks such as "If I Can't Have You", "You Stepped Into My Life", "Love Me", "More Than a Woman" and "Rest Your Love On Me". Side three also consists songs that spawned cover versions for other artists. Side four contains "Nights on Broadway", "Spirits (Having Flown)", "Wind of Change", "Love You Inside Out" and "Children of the World".

Two charting singles, "Boogie Child" and "Edge of the Universe" were omitted in favor of tracks that other artists had hits with such as "Love Me" and "If I Can't Have You" (Yvonne Elliman) and "You Stepped Into My Life" (Wayne Newton). Incidentally "Boogie Child" reached the same Billboard position as Yvonne Elliman's version of "Love Me", while Wayne Newton's recording of "You Stepped Into My Life" only peaked at 90. "Boogie Child" did appear in the box set Tales from the Brothers Gibb, but it was again passed over on the double disc set Their Greatest Hits: The Record from 2001. Greatest was released on CD as a two disc set, but has since has been deleted domestically with the release of The Record.

On September 18, 2007, Reprise Records released a remastered and expanded version of Greatest. Many of the tracks on Greatest have been previously remastered, but the album contain the first release for remastered versions of "You Stepped Into My Life", "Rest Your Love on Me", "Wind of Change", "Spirits (Having Flown)" and "Children Of The World". In addition, there are extended versions of "Stayin' Alive" and an unreleased Bee Gees track, "Warm Ride", which was written for the group Rare Earth. The re-release contains new mixes of "You Should Be Dancing", "If I Can't Have You", "Night Fever" and "More Than a Woman" and as a hidden track, a new mix of "Stayin' Alive". Billboard's unofficial policy states a album requires at least 33% new material to qualify as a new release; Bee Gees Greatest contains about 28% new material, thus making it a re-issue.

Bee Gees Greatest topped the Billboard album charts early in 1980, becoming their third consecutive number one album. The re-issue of Bee Gees Greatest debuted at #1 on Billboard's Pop Catalog charts for the week of September 30, 2007. There was some question as to whether Billboard was going to treat this as a new release or a re-issue. The set scanned over 20,000 copies for the week, making it the 35th best selling album in the country, good enough to place in Billboard's Top 40.
Posted by disco2go at 23:38