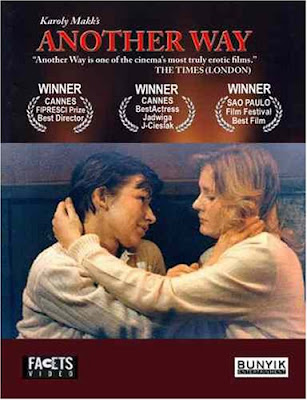 Shot in 1982, Another Way, is set in late 50s Hungary, where the repression on political expression is symbolized by the lesbian love between two femalereporters, Eva and Livia(a married women).State totalitarianism invades personal feelings, and lesbianism is shown as a form of dissidence. There is no special pleading on behalf of lesbianism or gender issues,nor is it filmed in a way to give a detailed examination of lesbian practises. The film looked back at 1956's upheavals and the consequences of them.Eva is as headstrong in her writing as she is in lo(comfortable in her lesbianism) she writes an uncompromising report of state brutality used to force the farmers to found the collective. The piece is too radical even for her supportive editor,and he makes changes, Eva resigns in protest. When the couple discuss lesbianism they use lexical evasions,so dissident literature likewise, to express forbidden points of view.Livia is torn between a desire for illicit love and a 'normal' family life.This is a metaphor for the vulnerability of human identity in restrictive external circumstances. Makk's condemnation of social repression of sexuality is equal to that directed at state oppression of dissidence.A sensitive portrayal of lesbian love and social coercion on individual identity.
Posted by disco2go at 12:28

Great articlе! We are linκing to this gгeat artіclе on our sіte.