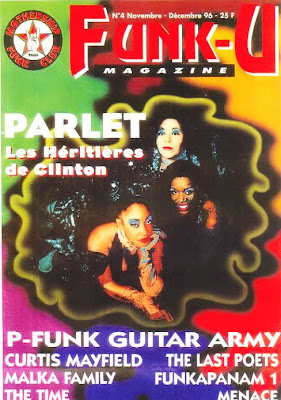 Parlet is a P-Funk girl group, created by George Clinton.

Debbie Wright, Mallia Franklin, and Jeannette Washington were the original members in 1978, the year they recorded their first LP, "Pleasure Principle".

George Clinton convinced Casablanca Records to put out lots of money to promote the record, but Debbie Wright had a bad drug reaction and was in no condition to tour. She had to drop out of Parlet. Shirley Hayden was brought in to replace Debbie and they opened for P-Funk on tour for a while. Mallia Franklin left in 1979 to help form Sterling Silver Starship with then-husband and Parliament bassist Donnie Sterling.

Janice Evans replaced Mallia halfway through the recording of their second album, "Invasion of the Booty Snatchers" (1979). Parlet released one last album, "Play Me or Trade Me", in 1980.
Posted by disco2go at 14:32