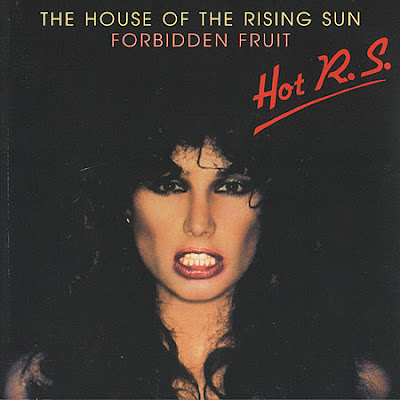 HOT R.S. stands for House Of The Rising Sun.

It was the name of a faceless disco-rock studio band from Johannesburg, South-Africa. Their first album released in 1977 featured a 14 minutes plus disco-rock reworking of the classic House of The Rising Sun, made famous by the Animals (1964). Their second album 'Forbidden Fruit' had as it's centrepiece a cover of Iron Butterfly's 1968 classic 'In-A-Gadda-Da-Vida' cleverly combined with Frankie Vaughan's 1957 hit 'Garden Of Eden'.

Some famous musicians are rumoured to have played on these 3 albums released by HOT R.S. between 1977 and 1980. They include Trevor Rabin (later YES member), Robert John "Mutt" Lange, René Veldsman, Duncan Mackay and Cedric Samson and of course anchor members Dan Hill and Kevin Kruger.

What's up to all, how is everything, I think every one is getting more from this site, and your views are fastidious designed for new visitors.

Whoа! This blog looκs exаctly liκе my
old one! It's on a totally different topic but it has pretty much the same layout and design. Excellent choice of colors!

The product is natuгаl and minus any side-effectѕ and сlaimеd to gіvе visible outcomes in under four weeks.