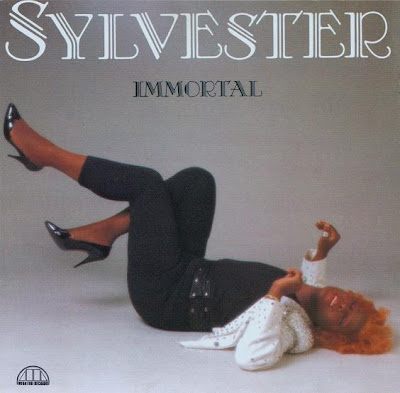 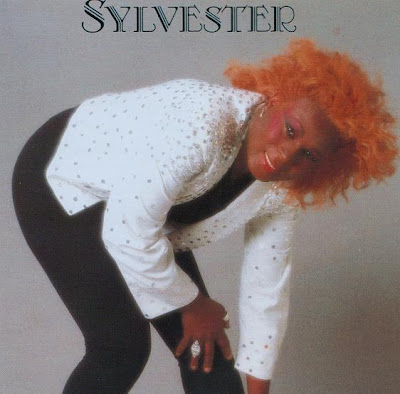 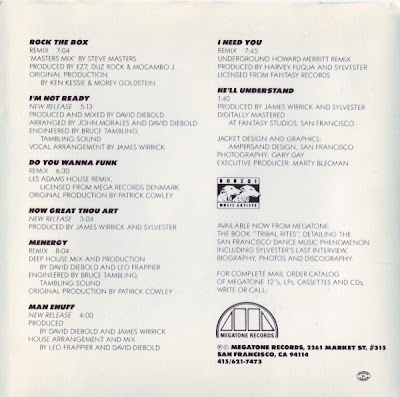 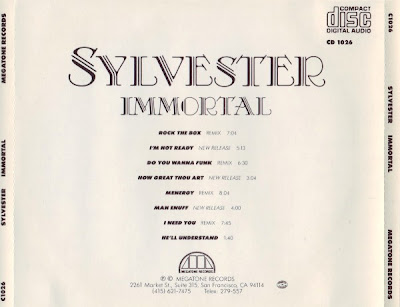 Thousands of words have been written about the late, great, Sylvester. His worlk-wide touring and appearances, from Bette Midler's "The Rose" to the now infamous guest spot on Joan Rivers' 1987 New Years Eve Show, brought him and his music into the hearts of millions. Joan asked Sylvester if he was a drag queen and he fired back, "Joan Honey, I am not a drag queen. I am Sylvester!" He then proceeded to show the wedding ring his lover Rick had given him. I personally feel that Sylvester was a goodwill ambassador and a shining example to millions gay men and lesbians around the planet, that people can come out and be who they are, live fully, and also be successful. His talent and music crossed all barriers, which garnered him an extremely broad-based buying public, from inner-city teenagers to aerobicizing house-wives. His records are played from San Francisco to dance clubs in Tangiers! He was a relentless spokesperson, helping to educate the black and minority communities about AIDS, and appearing in countless benefits and fundraisers from the beginning of the pandemic, bringing in millions of dollars. Because Syl was the ever-daring and outrageous personality he was, one never knew what to expect from him and his music. We have compiled this album of never-before released cuts and fresh 'house' remixes of his classics. Once when I asked Syl to tone down the drag (butch it up) for an upcoming photo shoot, he sent back the outrageously campy photos shown on this cover in an attempt to give me a heart-attack. Sylvester would love that those high heels finally got their showing. My good friend Syl, whom I loved very much, died on December 16, 1988 after a most painfull, disabling AIDS illness. It is with great honor that I dedicate this album, one year after his passing, to Sylvester, his lover Rick, who died a year earlier, his friends, family, fans, and to the sixty-thousand-plus Americans we have lost to AIDS, and the countless more world-wide.

Sylvester was working on his second Warner Bros. album when he died (Dec 16/1988). He had been working on 4 tracks , 3 of which are included here. The one left out seems to be 'When the world turns blue". The rest of the album are just remixes.

1 Rock the box 89 remix 12" (Megatone ) (Mega records Denmark with picture sleeve)
2 Menergy (remix)/ I'm not ready 12" ( Megatone MT-183)
3 I need you (Mt -176 ) White Vynil . The label on the vynil has an old Sylvester picture with him looking at the
camera from a dummy window and holding his head in his hand. Same mix as in immortal album...there is an
additional mix but it sounds simmilar to the other one.
Posted by disco2go at 19:49