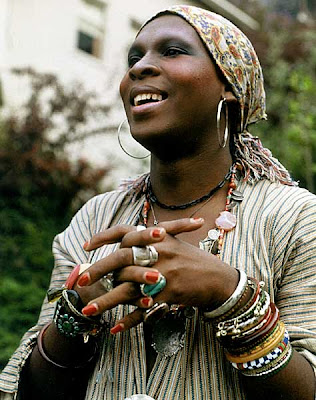 Sylvester James (September 6, 1944 in Los Angeles, California – December 16, 1988 in San Francisco, California) was an American disco and soul musician, and a gay drag performer. Known for singing in falsetto (despite a rich baritone voice), he is also considered one of the first Hi-NRG artists. His grandmother was the jazz singer Julia Morgan. He performed under his first name only, Sylvester.

Living in San Francisco in the 1960s, he performed in a musical production called Women of the Blues, then joined a short-lived group of transvestite performance artists called The Cockettes in the early 70's (famed transvestite Divine was a member of the group as well). Sylvester can be seen in the Cockettes' outrageous short film Tricia's Wedding, lampooning the wedding of President Nixon's daughter Tricia, and in an eponymous 2002 documentary about the group.

In 1972, Sylvester supplied two cuts to Lights Out San Francisco, an album complied by the KSAN radio station and released on the Blue Thumb label. In 1973, Sylvester & his Hot Band released two rock-oriented albums on Blue Thumb (their self-titled debut was also known as "Scratch My Flower," due to a gardenia-shaped scratch-and-sniff sticker adhered to the cover). Signed a solo act to Fantasy Records in 1977, and working with the production talents of legendary Motown producer Harvey Fuqua. Sylvester later alleged that Fuqua cheated him out of millions of dollars.

Moving to Megatone Records in 1982, Sylvester quickly landed a Hi-NRG classic with "Do You Wanna Funk." He was close friends with other Megatone artists Linda Imperial and Jeanie Tracy. Sylvester was also very close to the legendary Patti LaBelle.

Later pressure from the label to "butch up" his image would result in him attending meetings in full-on drag. A drag photo shoot, which he staged and presented to label heads as a gag (calling it his "new album cover") would later grace the cover of Immortal after Sylvester died; it was the label's way of paying tribute to his spirit. In 1985, one of his dreams came true as he was summoned to sing back-up for Aretha Franklin on her Who's Zoomin' Who comeback album. His sole Warner Bros. album was Mutual Attraction in 1986; a single from the album, "Someone Like You," featured original cover art by Keith Haring.

Sylvester died of complications from AIDS on December 16, 1988. His good friend Jeanie Tracy took care of Sylvester during his last days.

In 2005, a biography written by Joshua Gamson and titled The Fabulous Sylvester: The Legend, The music, The 70s in San Francisco was published.

She was really a musical legendary. I admire her a lot. It is caused by her work in musical field.

I heard that he was a great and inimitable disco diva. Actually I never heard his music before. But I've read his biography. And It was great.

Too bad that he never knew what the society gave him after his death. A great achievement for his music.